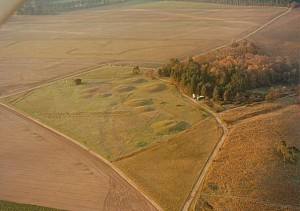 The above entries are based primarily on the authoritative report by Rupert Bruce-Mitford, The Sutton Hoo Ship Burial, 3 vols (British Museum 1975, 1978, 1982) and the more recent handbook by his successor, Angela Care Evans, The Sutton Hoo Ship Burial (British Museum 1986). Rupert Bruce-Mitford’s Aspects of Anglo-Saxon Archaeology (London 1974) is also very useful.

The treasures from the Sutton Hoo ship-burial can be seen in the British Museum or on their website.

The National Trust Visitors’ Centre at Sutton Hoo was opened in March 2002. This has made the site and its story more accessible than ever before and is a huge asset to Sutton Hoo studies.

However, I have had to query the wisdom of the some of the contents of the exhibition building at times – for example, several of the prominent paintings by Kelvin Wilson.

The Mound 17 horse and rider, for example, depicted with what appeared to be a Native American horse ridden by an arrogant hippy. For some reason, this image was in the background of the painting, the foreground being dominated by what looks like a pair of peasants. The artist appeared to have assumed that the working classes had been excluded from Sutton Hoo and so had sought to compensate by foregrounding these two ‘forgotten’ figures. The painting thus seemed to have little to do with attempting to authentically reconstruct the horse and rider from Mound 17, surely one of the richest and most interesting horse-and-rider burials ever discovered on the island of Britain. It seemed to be more about projecting a rather superficial political view of our past which is still fashionable in some quarters despite being lampooned with great comic effect in a memorable scene in Monty Python’s Quest for the Holy Grail, where Arthur’s legendary kingship is questioned by a muddy peasant using the jargon of the students’ union bar.

I also had grave doubts about the huge painting of the hanged man, which seemed unnecessarily obtrusive by the door of the treasure-room – and why was there a sort of abbot by the gallows? After Professor Carver eventually accepted that the so-called “execution burials” which he excavated were part of a separate chapter of the site’s history, this painting should have been removed.

Nevertheless, the exhibition was well worth a visit. Among many other good things (such as the treasure room, the replica harp, the recordings of music and Old English poetry, or the Mound 17 horse harness and fittings) , its centre-piece was the a superb full-scale reconstruction in oak of the midsection of the ship and the burial-chamber (though the shop-dummy lying on the deck looked very unlike a king lying in state).

However, all this has been recently changed. Although I welcome the removal of the paintings discussed above, it remains to be seen whether or not it is an improvement on the old one.