The extraordinary fact is the discovery of these staggering treasures came about through the visionary imagination of Mrs Edith May Pretty of nearby Sutton Hoo House, who was the owner of the site in the late ‘thirties. Edith, from the Old English Ead-gyþ, which can interpreted as perhaps originally meaning ‘Wealth-Amazon’, is a noble name for the custodian of the royal burial-site at the time. She was one of a series of at least three great ladies who have wielded authority at Sutton Hoo – the other two being the wife of Rædwald, who some believe may have been responsible for her husband’s magnificent funeral-rites, and the late Mrs Tranmer, through whose magnanimity the National Trust has acquired the site for the nation.

The story of Edith May Pretty has been told in varying forms. Certainly her active interests in spiritualism provided a source of inspiration. It is also said that she became convinced that there was treasure in Mound One on the basis of a vivid dream, in which she saw and heard the funeral procession. Another account tells how one evening she saw the figure of an armed warrior standing on the mound in the twilight. Finally, she is said to have employed a dowser who divined gold beneath Mound One.

So convinced was she that there was treasure in the mound that she wrote to Mr Guy Maynard of Ipswich Museum, requesting the services of an archaeologist. He sent her Mr Basil Brown, a Suffolk man who had learned his trade the hard way through practical experience. He was without doubt the best man for the job, as he was very familiar with Suffolk soils and Suffolk sites, having worked and ridden all over the county on his bicycle. 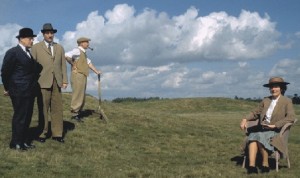 The Eastern Angles’ Theatre Company performed a compelling version of the story of discovery of the Sutton Hoo ship-burial in a play entitled The Sutton Hoo Mob. Here the actors representing (from right to left) Edith May Pretty, Basil Brown, Charles Phillips, and Guy Maynard, present themselves beside Mound One (author’s photo).

On Monday 20th June 1938, Basil Brown arrived at Sutton Hoo. In his diary he states that Mrs Pretty showed him the mounds and that he was “rather alarmed by their sizes.” Mrs Pretty wanted him to open the largest one of them all first. This was Mound One, where she was certain something special lay buried. Somehow, Basil Brown managed to persuade her to begin work on the slightly smaller mound next to it (Mound Three) “for exploration purposes.”

Clearly Mound One remained the important one for Edith Pretty, however. Basil’s diary states that she only agreed to the excavation of Mound Three “after suggesting a trial on top of Tumulus 1 with a long probing iron she had had made”. This proved inconclusive, though Basil records that “this trial did … give me some data regarding the soil composition of the mound, which came in useful when excavation was undertaken.”

With the assistance of two labourers from Mrs Pretty’s estate, and using tools borrowed from her gardener. Basil began excavating Mound Three by putting a trench from its eastern end to find the buried ground surface and then working in towards its centre, widening the cut until he came to the darker soil of a backfilled grave-pit. Here he revealed a burgled Anglo-Saxon cremation burial placed (uniquely) on what appeared to a large oak board 5 feet, 6 inches long, and 1 foot, 10 inches wide, laid down with its length aligned just off the east-west axis . With hindsight, we might now perhaps regard this as the disturbed remains of a dug-out boat not unlike those discovered recently in contemporary burials at nearby Snape. Basil himself considered this a possibility at the time.

Surviving finds from Mound Three included: fragments of relief carved bone facings perhaps from a delicately made casket; the rusted head and part of the haft of a francisca, a Frankish throwing axe (a weapon rarely found in English archaeology); the cast bronze lid of a jug which had been imported from the eastern Mediterranean (also rare); and part of a finely carved limestone cameo showing what appears to be a classical winged victory figure (quite unique).

Basil then went on to the large mound on the north edge of the site, Mound Two, which had also been thoroughly robbed. He did however come across scattered, rusted iron ship’s rivets, similar to those found in the – until then – only known Anglo-Saxon ship-burial, which had been discovered at Snape in the 1860′s. Surviving finds from this grave included a five and a half inch fragment from the tip of a pattern-welded sword blade, a gilt-bronze disc with a zoomorphic interlace design, fragments of a blue glass jar, fragments of silver-gilt foil stamped with a zoomorphic interlace design from a large drinking horn, and part of a gilt-bronze dragon’s head, probably from a shield. Despite being thoroughly burgled, Basil showed that Mound Two had contained a late sixth- or early seventh-century high status boat-burial.

Basil completed his 1938 season of digging at Sutton Hoo with the excavation of Mound Four. This was a burgled cremation on bronze bowl. The pathologist’s report on the bone remains suggested that this may have been a female buried with her dog and horse, the latter apparently deaf in one ear.

Basil began excavating Mound 1 in May 1939. As in 1938, he started by trenching into the eastern end of the mound. He soon came across ship-rivets, but this time undisturbed in neat rows, unlike those in mound 2 the previous year. Realising the implication – a potentially unburgled ship-burial – he backfilled his trench so as not to dislodge the rivets and then came in from the top. It was this move that enabled him to uncover the perfect shape of the ship in its glorious entirety. Let us now look at the great ship itself.