For the full story of Rædwald, see my book, The Reckoning of King Rædwald.

The conjectural full Old English spelling of his name may have been Hrædwald or Hræðwald.

He is known to have received primary baptism in Kent, c.605, and on his return home, following the advice of his wife, he is said to have set up a temple of two altars, one to his ancestral gods and one to his new god (HE II, 15).

Rædwald became High King of Britain after defeating Æthelfrith, King of Northumbria, at the Battle of the River Idle, c.617 (HE II, 5, 12 & 15). The site of this battle appears to have been at point where the Roman road from Lincoln to Doncaster crosses the River Idle near Bawtry. My picture below (looking north) shows the later bridge which straddles the river just south of the Roman ford. 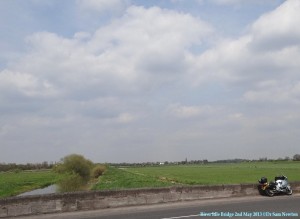 Although Bede is selectively unspecific about it, following this victory Rædwald appears to have been first king of England, both north and south of the Humber.

Rædwald is believed by many to have been buried in Mound One at Sutton Hoo, the famous ship-burial, c.625.