The sword-scabbard was secured to the sword-belt by a two-point suspension system, not unlike later cavalry sabres. The upper end was secured to the sword-belt by a pair of gold and garnet cloisonné buttons. Each is three quarters of an inch high but of slightly varying diameters – one is nine tenths of an inch wide and the other is eight tenths of an inch wide. The gold is between 86 and 89 per cent pure with 10 per cent silver. Each button has 110 inlays of garnet of carefully arranged differing hues. In contrast to the darker reds of the outer garnets on the buttons’ faces, lighter, more orange garnets have been set towards the middles to produce a cruciform design. The number and small scale of these gems, some very tiny indeed, such as those inset around the edges, again raises questions as to how the garnets were cut.

The lower part of the sword-scabbard was secured by a gold cloisonné mount in the form of a buckle, shaped to curve across the front of the scabbard. It is three inches long and one inch across at its widest and has with 141 garnets set in gold 81 per cent pure with 16 per cent silver. The rather distinctive mushroom-shaped garnets are clearly visible in the picture above. Note also the waffle patterns underneath the garnets which can be seen in the curved middle of the mount.

These patterns are produced by light reflecting through the garnets from gold foil which are carefully set beneath each one. All of the garnets from the Sutton Hoo treasure are similarly underlaid with gold foil, but it depends on the angle of the light as to their appearance. The gold-foil underlays are finely stamped to give them the waffle patterning, thus cleverly cleverly providing each individual garnet with a light-catching quality which causes the gems to sparkle and flash like magic with the slightest of movements.

Without the gold foil underlay the garnets would appear darker, as do the big round cabochon garnets on this mount. With flat gold-foil they would be brighter, but it is the fine detail of the stamped pattern which really makes all the difference, animating each gemstone with spell-binding depth and brilliance. It is the sophisticated use of these stamped gold-foil underlays which really brings the jewels to life.

The lower scabbard mount is intended to look like a buckle but is not actually a working buckle. Its curved shape fitted around the lower end of the scabbard and a fine strap ran from the narrow end of the mount (fastened at the back of the large cabochon garnet) around the back of the scabbard, back through the simulated, garnet adorned buckle-loop. The scabbard was thus held but the arrangement allowed for adjustment. The lower suspension strap then ran up up to the main sword belt, to which it was secured by a T-shaped mount.

This T-shaped mount provided the link between the lower scabbard suspension strap and the sword belt (British Museum).

The top of the T-shaped mount (at the level of the sword-belt) is 2.1 inches long and 0.8 inches across and is joined to its lower section, to which the lower suspension strap fitted, by a double hinge system. The latter allowed the maximum freedom of movement and is still in perfect working order. The mount is made of gold, 83 per cent pure, with 14 per cent silver, and inset with 156 garnets, including the tiny honeycomb cells on the inside of the upper hinge. The top of the T formed part of a complete series all the way round the royal sword belt, which included two other pairs. 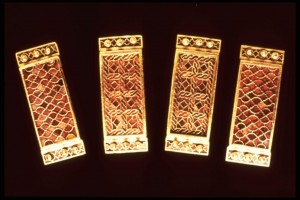 The two pairs of mounts which adorned the sword belt (British Museum).

Each of these two matching pairs of mounts matches the top of the T-shaped mount in size (2.1 inches by 0.8 inches). They are made of gold between 90 and 94 per cent pure with between 4 and 7 per cent silver. The outer pair in the picture above are inset with 160 garnets each and the inner pair have 210 garnets each. The inner pair show a unique development in the technique of cloisonné jewellery – the garnets are cut and set in a running interlace pattern, usually found in manuscripts or sculpture, but rarely in such a medium as garnet cloisonné.

It is the technical innovation of the ‘beaded’ gold cell – a thickening of the cell-wall between the gems on the inside of the curves – which enables the success of this ambitious design, by enhancing its fluidity and freeing the designer-craftsmen from the sharper angles inherent in cell-walls of uniform thickness (as can be seen in outer pair above). Note that the right-hand one of the inner pair, with its more rounded corners and smoother junctions of interlace elements, is more successful than the left-hand one; this suggests that the left-hand one was the first to be made with this pioneering design, and that by the time our master-jewel-smiths came to make the right-hand one they was surer of the work. We may, in other words, see the order of manufacture at the hands of truly innovative East Anglian craftsmen. Our master-craftsmen appear to have later gone on to extend the use of gold further with the use of the ‘lidded’ cell, where whole cells in the cloisonné were capped with gold rather that garnet, thus enabling even more ambitious designs to be achieved, as we shall see.

The buckle of the royal sword belt (British Museum).

The royal sword belt was secured by a matching cloisonné buckle (2.6 inches long and 0.8 inches wide) made of gold 83 per cent pure with 14 per cent silver and inset with 103 garnets. It appears to be one of the only pieces of this exquisite cloisonné set that has sustained damage, having been caught under the sword when the roof of the chamber collapsed. Some of the garnets are broken or have fallen into their gold cells, enabling internal examination without further damage to the cloisonné.

Examination shows that the garnets are cut with such precision in relation to their settings that they are held in place in their gold cells without the use of glue. This appears to be the case with all cloisonné jewellery from Sutton Hoo. The only thing that makes garnets fit completely securely in their cells is that wondrously light-catching stamped gold foil underlay discussed above in relation to the Lower Scabbard Mount. It seems that each of the foils was cut so that it was just a little wider than the garnet it was intended to underlie, thus forming a tight seal between the edge of the gem and the gold wall of the cell when the garnet was set in place. It is this astoundingly accurate coordination of gem-cutting and goldsmithying, perfect throughout, which provides another outstanding and characteristic feature of the East Anglian royal workshop.

Here then was a magnificent sword and sword belt which had been so beautifully adorned that it was truly fit for a king.

Now, the royal hips were also encircled by another belt, the royal money belt, which was secured by an even more magnificent buckle.