Son of Eni; godfather of Cenwalh, exiled king of Wessex. Onna was later exiled himself and afterwards killed in battle by Penda (HE III, 18; ASC 654). There is a long-standing view that this battle was fought at Bulcamp, just across the river to the north of Blythburgh.

This early nineteenth-century travellers’ rest in Springhole Lane, Bulcamp, is said to have been built over the site of a spring which was once believed to have miraculously appeared on the spot where Onna was killed in the battle [author’s photograph; thanks to to Mr Johnceline of Wenhaston for this information]. 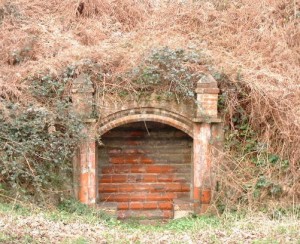 He was buried at nearby Blythburgh, either on the site of the later great church, or in the priory area to the east, where his tomb was still being venerated by pilgrims in the twelfth century (Liber Eliensis).

King Onna might be identified with the ‘King Æþelmund’ of Abbot Folcard’s Life of St Botolf . Certainly the form of the compound name Æþel-mund is precisely consistent with those of all Onna’s brothers, Æþelric, Æþelhere, and Æþelwald. As Anna (Bede’s spelling) or Onna (the form in the Anglo-Saxon Chronicle) seem likely to be variants of the same nickname, the fuller version of his name may well have begun with Æþel.

Folcard also implies that his queen may have been named Sæwara.