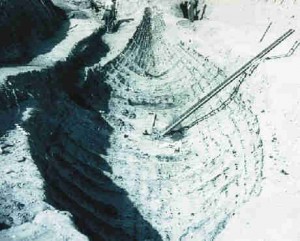 This view along the opened length of Mound One in 1939 shows the shadow of the leaf-shaped long-ship imprinted in the sand by the remains of its timbers and the oxidisation of its rivets. Note the rectangular shape of the collapsed but unburgled burial chamber amidships (British Museum).

The perspective in the picture above gives a foreshortened view of the vessel and does not really give a sense of its sheer size. Its estimated original dimensions are that it was at least 89 feet long and up to14 feet in the beam, with a prow perhaps 12.5 feet above the keel amidships. Drawing about two feet of water when light; she was clinker-built of oak planks one inch thick held together with iron rivets, with 9 strakes a side, and strengthened by 26 ribs. Her steerage was by means of a side rudder at the starboard (‘steer-board’) side of the stern, where an extra rib had been built in to take the strain of the steering oar on the hull at that point.

The Sutton Hoo ship appears to also to have been sail-powered, even though no evidence of a mast was found in the excavation.  Perhaps the mast and its stepping was removed when the burial chamber was built.  The admirable sailing qualities of the hull have been impressively demonstrated in recent years by Edwin and Joyce Gifford with their wonderful half-size working replica, Sæ Wylfing, which has very much brought the vessel to life again.

Edwin Gifford [by the helm] and crew from the Colchester Historical Reenactment Society casting off Sæ Wylfing from Ramsholt quay, 1994 (author’s photograph).

Sæ Wylfing on the lower Deben near Bawdsey in 1993 demonstrating her sailing prowess – note the angle of sail to the wind (almost on the beam) yet she still makes good headway, as can be seen from the bow-wave (author’s photograph from aboard Robert Simper’s boat).

Sæ Wylfing under oar on the River Deben at Woodbridge near Sutton Hoo in 1995 (author’s picture).

The original ship was certainly old when ultimately used as a funeral-vessel, as could be seen from the patterns of rivets in places where the hull had been repaired. The rite of ship- or boat-burial is very much a Northern, especially Anglo-Scandinavian phenomenon. Because the world-famous Norse ship-burials from Oslofjord date from the Viking Age (the ninth century), it is sometimes assumed that the Sutton Hoo ship-burial is also of Viking origin. But the Sutton Hoo vessel was interred beneath its great mound at some point in or around the third decade of the seventh century, well before the Viking Age. The rite of ship-funeral at Sutton Hoo is, in other words, Old English, but, like the Old English epic of Beowulf, realising a close early Anglo-Scandinavian affinity. There is, moreover, a strong early Scandinavian character in many of the individual finds from the burial, as we shall see.

The last voyage of the old ship may been down the river from the royal hall of Rendlesham, before it was somehow conveyed up to the site of its final berth, some 100 feet above the water at Sutton Hoo. Let us now enter the burial chamber.
© Dr Sam Newton AD2000, 2013